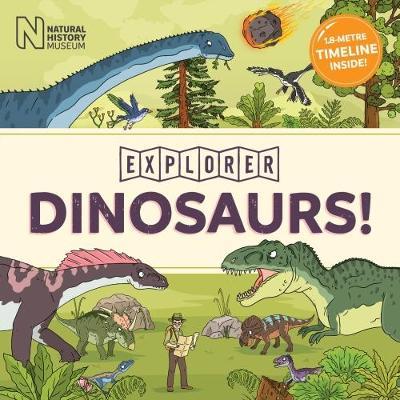 Dig deep into the fascinating world of dinosaurs with the first book in the What on Earth Explorer series, complete with a 2-metre long fold-out timeline. Join explorer Agent Eagle as he explores these amazing creatures – from the earliest fossil discoveries to the relationship between birds and dinosaurs. Discover the history of the dinosaur, in each major era, emphasising how dinosaur bodies and diets adapted over time. Learn about the best places to find fossils, who are the great dinosaur explorers and scientists and ultimately, what killed off the dinosaurs. A quiz, name game and glossary lead you to the book’s biggest feature – a fold-out timeline featuring 100 of the most incredible dinosaurs that ever lived – from their first appearance 230 million years ago, to their current living descendants. Full of facts and bursting with illustrations, Explorer: Dinosaurs! is a unique book for any dinosaur buff.

What On Earth Publishing