Home Shop Keeper: The Most Talked About Debut of 2020 Jessica Moor 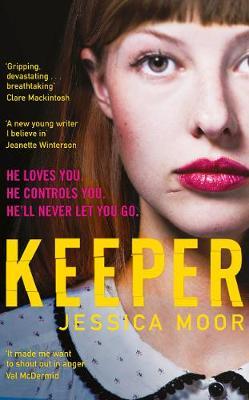 Keeper: The Most Talked About Debut of 2020 Jessica Moor

KEEPER is the addictive literary thriller everyone’s talking about this spring. AN OBSERVER TOP DEBUT NOVELISTS OF 2020 A SUNDAY TIMES STYLE HOT DEBUT OF 2020: ‘READ IF YOU LIKED GONE GIRL AND LULLABY’ A COSMOPOLITAN BOOKS TO WATCH MARCH 2020 ‘A new young writer I believe in’ Jeanette Winterson ‘Gripping, devastating…breathtaking’ Clare Mackintosh ‘Powerful and chilling, with a shocking twist … an important story, well told’ Guardian ________________ He’s been looking in the windows again. Messing with cameras. Leaving notes. Supposed to be a refuge. But death got inside. When Katie Straw’s body is pulled from the waters of the local suicide spot, the police decide it’s an open-and-shut case. A standard-issue female suicide. But the residents of Widringham women’s refuge where Katie worked don’t agree. They say it’s murder. Will you listen to them? An addictive literary page-turner about a crime as shocking as it is commonplace, KEEPER will leave you reeling long after the final page is turned. ________________ ‘For a fictional account this book speaks many truths. The end may shock, but the brutal reality is that this is happening and the most haunting fact is that we are not talking about it’ – Bookseller ‘Jess Moor’s debut novel made me want to shout out in anger’ – Val McDermid ‘This is a thriller, but its pacy insights into the ways in which men exert control over women make it one that you need to read’ – Cosmopolitan ‘Tense, beautiful and lyrical. Everyone should read this book’ – Sara Collins, author of The Confessions of Frannie Langton ‘Still have a Girl on the Train-shaped hole in your life? Add Keeper to your list. Moor’s debut is a feminist whoddunit’ – Sunday Times ‘Wickedly paced and utterly chilling, making space for the interior lives of its victims and their gradually shrinking worlds, all the while exposing the failures of the systems that are supposed to protect them. As compulsive as it is heartbreaking’ – Rosie Price, author of What Red Was ‘Vastly impressive . . . Deeply affecting and superbly told, it demands to be read’ Daily Mail ‘Grips from the first page. Powerful, beautifully written and chillingly close to the bone, this is crime fiction with a conscience. Essential reading’ – Erin Kelly, author of He Said/She Said ‘A pacy crime novel that will have you gripped, and get you thinking . . . Moor coolly blends the crime genre to her will, turning it into a compelling examination of coercive control and structural sexism’ – Stylist ‘Made me rage and weep and understand a little better. A powerful book telling stories that need to be heard’ – Rosamund Lupton, author of Three Hours ‘Male violence in all its forms is at the heart of Jessica Moor’s confident and skillful debut’ – The Observer