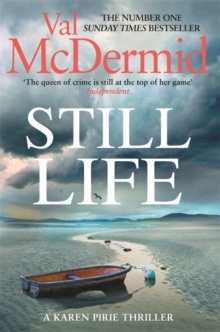 Will be sent after publication on the 20th of August.

‘No one can tell a story like she can’ Daily Express’One of today’s most accomplished crime writers’ Literary Review’The queen of psychological thrillers’ Irish Independent____________’The bodies never stay buried forever . . .’On a freezing winter morning, fishermen pull a body from the sea.

It is quickly discovered that the dead man was the prime suspect in a decade-old investigation, when a prominent civil servant disappeared without trace. DCI Karen Pirie was the last detective to review the file and is drawn into a sinister world of betrayal and dark secrets. But Karen is already grappling with another case, one with even more questions and fewer answers.

A skeleton has been discovered in an abandoned campervan and all clues point to a killer who never faced justice – a killer who is still out there. In her search for the truth, Karen uncovers a network of lies that has gone unchallenged for years. But lies and secrets can turn deadly when someone is determined to keep them hidden for good .

. . The number one bestseller and unrivalled queen of crime Val McDermid is back with her most exhilarating, breath-taking thriller yet.