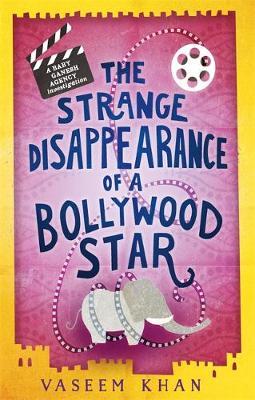 The enchanting new Baby Ganesh Agency novel sees Inspector Chopra and his elephant sidekick investigating the dark side of Bollywood. Mumbai thrives on extravagant spectacles and larger-than-life characters. But even in the city of dreams, there is no guarantee of a happy ending. Rising star and incorrigible playboy Vikram Verma has disappeared, leaving his latest film in jeopardy. Hired by Verma’s formidable mother to find him, Inspector Chopra and his sidekick, baby elephant Ganesha, embark on a journey deep into the world’s most flamboyant movie industry. As they uncover feuding stars, failed investments and death threats, it seems that many people have a motive for wanting Verma out of the picture. And yet, as Chopra has long suspected, in Bollywood the truth is often stranger than fiction… See what everyone is saying about this brilliant read: ‘I am in love with this series.’ Goodreads reviewer ‘First class read.’ Amazon reviewer ‘I can honestly say that I struggle with 364 days of the year when I do not have a new Vaseem Khan book to read. ‘ Goodreads reviewer ‘A brilliant addition to the series’ Amazon reviewer ‘I couldn’t put it down… This is a real treasure of a book.’ Goodreads reviewer