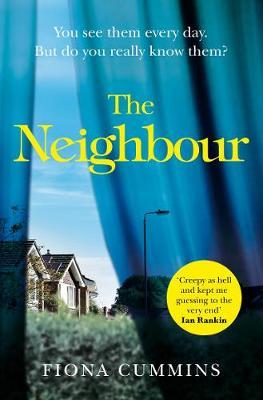 ‘Creepy as hell and kept me guessing to the very end’ – Ian Rankin A new home. A new start. It’s all the Lockwoods want. And on The Avenue, a leafy street in an Essex town near the sea, it seems possible. But what if what they want isn’t what they get? On their moving-in day they arrive to a media frenzy. A serial killer has struck in the woods behind The Avenue. The police are investigating. And the neighbours quite clearly have secrets. With their dream quickly turning into a nightmare, the Lockwoods are watching everyone. But who’s watching them? Praise for Fiona Cummins ‘Trust me – Cummins is a keeper’ – Lee Child ‘Head and shoulders above the rest’ – Val McDermid ‘A crime novel of the very first order’ – David Baldacci Dark, intriguing and gripping’ – Laura Marshall ‘What a storyteller’ – Caz Frear ‘A nightmarishly addictive read’ – CJ Tudor ‘Enthralled from beginning to end as each page drips with threat and menace’ – Liz Nugent The Neighbour by Fiona Cummins is a twisting thriller about a quiet neighbourhood that’s hiding a deadly secret.