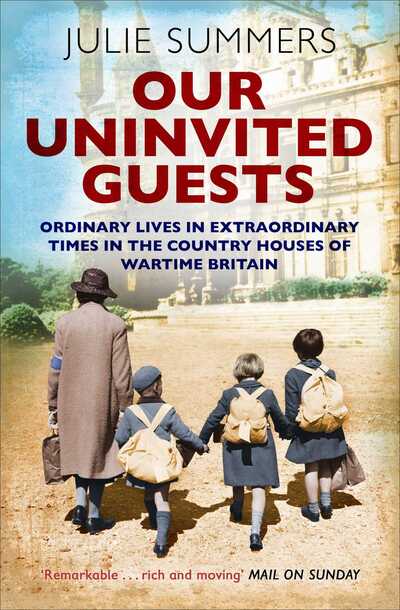 Our Uninvited Guests: The Secret Life of Britain’s Country Houses 1939-45

‘Julie Summers has an amazing instinct for unearthing good stories and telling quotes.’ Craig Brown, The Mail On Sunday ‘This is an enjoyable book, peppered with examples of under-reported wartime heroism.’ Robert Leigh-Pemberton, The Daily Telegraph ‘It’s hard to believe that there are still untold stories about Britain and World War II, but Julie Summers has unearthed a fascinating one that she tells with great verve and style. All in all, Uninvited Guests is a sheer delight.’ Lynne Olson, author of Citizens of London and Last Hope Island A remarkable narrative set against the dark days of World War Two, from one of the country’s foremost social historians. Our Uninvited Guests perfectly captures the spirit of upheaval at the beginning of the Second World War when thousands of houses were requisitioned by the government to provide accommodation for the armed forces, secret services and government offices as well as vulnerable children, the sick and the elderly, all of whom needed to be housed safely beyond the reach of Hitler’s Luftwaffe. Julie Summers gives the reader a behind-the-scenes glimpse of life in some of Britain’s greatest country houses that were occupied by people who would otherwise never have set foot in such opulent surroundings.Blenheim Palace was colonised by schoolboys who slept in the Long Library; Polish special agents trained in the grounds of Audley End House, learning to forge and lie their way into occupied Europe in the old nursery. Brocket Hall, former home of Queen Victoria’s favourite Lord Melbourne, was used as a maternity home for women from the East End of London, and the Rothschilds’ magnificent French chateau-inspired Waddesdon Manor housed a hundred children under five. The Northern Highlands, where the fierce warriors of Scotland’s past developed their unconventional military skills, played host to the most extreme form of warfare, training agents in the fine arts of sabotage, subterfuge and assassination. The juxtaposition of splendour and opulence with the everyday activities of people whose needs were at odds with their new surroundings is at the heart of this book. This thought-provoking and evocative narrative captures a crucial period in the social history of Britain. Praise for Julie Summers: ‘Superb…highly recommended’ Who Do You Think You Are Magazine ‘A remarkable collection of stories…a rich and moving book’ Mail on Sunday ‘Summers is a good and knowledgeable writer…powerful, emotional stuff’ Independent ‘A poignant, lingering account’ BBC History Magazine ‘A revelation – full of information, reminiscences, humour and social history. Reading it not only gave me great pleasure but also made me proud to be a member of such a long lasting, valuable and vital organisation’ Helen Carey OBE, former chairman of the National Federation of Women’s Institutes