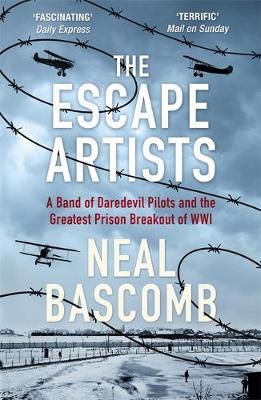 The Escape Artists: A Band of Daredevil Pilots and the Greatest Prison Breakout Neal Bascomb

In the winter trenches and flak-filled skies of World War I, captured soldiers and pilots narrowly avoided death only to find themselves imprisoned in Germany’s archipelago of brutal POW camps. After several unsuccessful escapes, a group of Allied prisoners of Holzminden – Germany’s land-locked Alcatraz- hatched the most elaborate escape plan yet known. With ingenious engineering, disguises, forgery and courage, their story would electrify Britain in some of its darkest hours of the war. Drawing on never-before-seen memoirs and letters, Neal Bascomb brings this little-known story narrative to life amid the despair of the trenches and the height of patriotic duty.