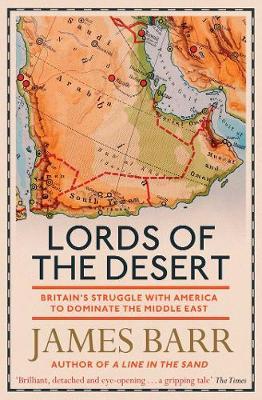 Lords of the Desert: Britain’s Struggle with America to Dominate the Middle East BARR JAMES

Guardian Book of the Day New Statesman Book of the Year History Today Book of the Year Times Literary Supplement Book of the Year BBC History Magazine Book of the Year ‘Bustles impressively with detail and anecdote’ -Sunday Times ‘Consistently fascinating’ -The Spectator ‘Beautifully written and deeply researched’ -The Observer ‘Barr draws on a rich and varied trove of sources to knit a sequence of dramatic episodes into an elegant whole. Great events march through these pages’ -Wall Street JournalUpon victory in 1945, Britain still dominated the Middle East. She directly ruled Palestine and Aden, was the kingmaker in Iran, the power behind the thrones of Egypt, Iraq and Jordan, and protected the sultan of Oman and the Gulf sheikhs. But her motives for wanting to dominate this crossroads between Europe, Asia and Africa were changing. Where ‘imperial security’ – control of the route to India – had once been paramount, now oil was an increasingly important factor. So, too, was prestige. Ironically, the very end of empire made control of the Middle East precious in itself: on it hung Britain’s claim to be a great power. Unable to withstand Arab and Jewish nationalism, within a generation the British were gone. But that is not the full story. What ultimately sped Britain on her way was the uncompromising attitude of the United States, which was determined to displace the British in the Middle East. The British did not give in gracefully to this onslaught. Using newly declassified records and long-forgotten memoirs, including the diaries of a key British spy, James Barr tears up the conventional interpretation of this era in the Middle East, vividly portraying the tensions between London and Washington, and shedding an uncompromising light on the murkier activities of a generation of American and British diehards in the region, from the battle of El Alamein in 1942 to Britain’s abandonment of Aden in 1967. Reminding us that the Middle East has always served as the arena for great power conflict, this is the tale of an internecine struggle in which Britain would discover that her most formidable rival was the ally she had assumed would be her closest friend. Reviews for A Line In The Sand:- ‘Masterful’ -The Spectator ‘With superb research and telling quotations, Barr has skewered the whole shabby story’ -The Times ‘Lively and entertaining. He has scoured the diplomatic archives of the two powers and has come up with a rich haul that brings his narrative to life’ -Financial Times