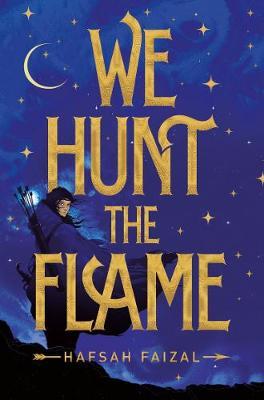 We Hunt The Flame Hafsah Faizal

*An instant New York Times bestseller* *A BuzzFeed pick for ‘YA Books You Absolutely Must Read This Spring’* *A Bustle’s Most Anticipated 2019 YA Release* *Paste Magazine’s Top 10 Most Anticipated YA Novels of 2019* People lived because she killed. People died because he lived. Nobody knows that Zafira is the Hunter. Forced to disguise herself as a man, she braves the cursed forest to feed her people. If she is exposed as a girl, all of her achievements will be rejected. Nasir is the infamous Prince of Death, assassinating those foolish enough to defy his autocratic father, the sultan. If he refuses he will be punished in the most brutal of ways. Both are legends in the kingdom of Arawiya – but neither wants to be. And when Zafira embarks on a quest to restore magic to her suffering world, Nasir is sent by the sultan on a similar mission: retrieve magic and kill the hunter. But an ancient evil stirs as their journey unfolds, and the prize they seek may pose a threat greater than either can imagine . . . Set in a richly detailed world inspired by ancient Arabia, Hafsah Faizal’s We Hunt the Flame – first in the Sands of Arawiya duology – is a breathtaking debut about discovery, conquering fear, and taking identity into your own hands.